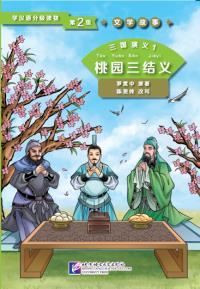 The series Graded Readers for Chinese Language Learners is composed of 50 books, divided into three subseries, namely folktales, literary stories and historical stories, corresponding to Levels 1-3 respectively. The rich and fun content and easy-to-understand language makes it easy for everyone, whether they are foreigners learning Chinese, children with parents of Chinese origin, ethnic minority students of the Chinese language, or even primary school students in China, to read this series. It enables the readers to gradually improve their Chinese reading skills and enhance their understanding of Chinese culture by reading and enjoying stories.


The “Literary Stories” subseries is based on the Four Great Classical Novels in ancient China. From each novel some epic snippets are extracted and adapted into 4-6 books, each with 20-30 thousand characters. Altogether there are 20 books in the subseries, six of which are from Romance of the Three Kingdoms, four from Water Margin, six from Journey to the West and four from Dream of the Red Chamber.


This book tells that the oath bound the three men to be of one mind and devote themselves to their country in the Three Kingdoms.